Encouragement: A gift to be given

September 24, 2019
Scott Drew is the head men's basketball coach at Baylor University. Over the past 16 seasons, he's won nearly 20 games per season. It's an impressive stretch for a program that has a mediocre history and when Coach Drew arrived, was almost completely dead. If you want to read a story of persistence and comeback, read "The Leftovers" which is the story of massive scandal and homicide that rocked Baylor basketball. That is the program that Scott Drew took over. The author of the book, Matt Sayman, was one of only two players that remained in the program after the scandal and during Coach Drew's arrival. The program was absolutely decimated with NCAA sanctions and terrible support from the local community. It was a very dark time in the life of Baylor basketball. Sayman says, 'Coach Drew was always positive and always believed we could do the impossible.' Those first Baylor teams under Coach Drew never actually accomplished the impossible in the win / loss column, but Coach Drew did something important. He provided the players on those teams the gift of encouragement that lasts to this day. 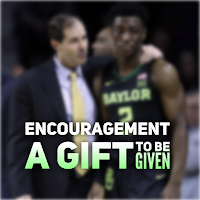 If you understand the intention of the word encouragement, maybe you'll want to give the gift a little more as well.

Encouragement is to give strength or courage to another. It is the kind of expression that makes someone want to go on.

Here are a couple ways a leader can give the gift of strength and courage to someone to the people in their care...
Call when things go wrong - Over the last year or so, I've really tried to embrace the mantra of 'being the kind of leader that people want around when everything is going wrong.' An important way to do this is make sure you are actually present when things are going wrong. Often, the best way to do this is to call and talk voice to voice to someone when their world is falling apart. Pick up the phone and show up for your people when things are not going well.
Confirm why things went well - Notice the wording of this suggestion. Expressing appreciation when things go well is nice. Expressing appreciation to someone for what they did (the why) to make things go well is next level encouragement. As a leader, it is important that you give people the freedom to make good things happen and then take the time to tell them what you observed as the 'why' behind those good things. A team member knows why things went well but to know that it was observed and confirmed by the leader is very encouraging.
Compliment by name and task - No matter what your opinion of the Bible might be there are some excellent accounts of incredible things that we can learn a lot from. One of those accounts is of Nehemiah who returned to Israel and returned it's economic and military stability after the Babylonians had conquered it. Nehemiah rallied a diverse and unskilled group of laborers to accomplish the incredible engineering feat of rebuilding the walls around Jerusalem resurrected in only 52 days. The historical account includes an entire chapter of Nehemiah recognizing every group of laborers by their name and the task that they completed. This is simple and powerful encouragement that I have tried to implement anytime I address a group publicly. I compliment someone on my team by their name and by the task that they have performed well for our group.
There are a lot of different ways to give the gift of encouragement. I have only listed a few of the ways that this can be accomplished. I want to encourage you to be the type of person that gives the gift of encouragement to as many people as you can.
Keep on, keepin on, friend!


‘Bite Down and Don’t Let Go’ is a collection of writings on being intentional about life in a way that produces great persistence. Read about it more here.

Dr. Chris Hobbs is an educational leader and Director of Athletics at The King’s Academy in West Palm Beach, Florida. He’s earned a few degrees and won some awards. He’s happily married to his high school sweetheart and they have three teen age children. Life is messy and complicated most of the time. You can follow him on Twitter for all sorts of inspirational thoughts and good laughs.
character coaching excellence faith leadership 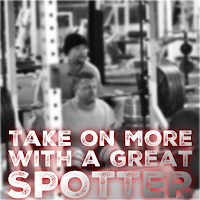 Surround Yourself with Great Spotters

Weight lifting is many times the activity that separates good athletes from great athletes. I’ve said before that weight lifting can teach an individual so much more than technique. Lessons such as self-discipline, maximum effort, and perseverance can be learned in “HD” quality through an extended weight lifting program. In my own personal pursuits, I was recently reminded of another lesson: the value of a partner. Any good weight lifting program will eventually require the assistance of a partner to “spot” the athlete. The “spotter’s” job is to ensure that the athlete pushes themselves beyond their maximum potential and then assist them once they get there. The spotter actually assists the athlete allowing them to do more than they would be capable of on their own. The result is the athlete at some point in the future can manage the weight load all by themselves without the assistance of the spotter. It is certainly possible for an athlete to progress without a spotter; however the p 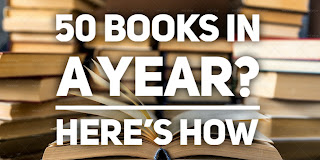 50 books in a year? Here are 3 reasons why and 6 ways to increase your reading

I read 15 books in 2019 while completing a doctoral dissertation. I read 36 books in 2020 while leading through a pandemic. I read 44 books in 2021 while my wife gave me most of the household duties so she could complete a master’s degree, parenting three kids, both of us taking new jobs and moving 1200 miles, and leading in two different contexts as the pandemic continued.  I’ll read more than 50 in 2022. I am not bragging; in fact just the opposite. I am not a speed reader. I do not have an enormous IQ. I am not gifted in any unusual way. The world is full of people way more intellectual than me. That’s why I wanted to share this post. I’m just a 'rando' (my son’s word) guy that accepted some common wisdom and put some simple things in place that led to a lot of books being read. I didn’t know it would lead to reading this many books, but it wasn’t difficult, either. It was just life. I think you can make it part of your life and make your life better because of it too.  Here 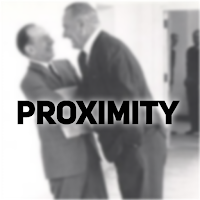 Proximity: 4 ways to stay close to the people you are leading

Leadership contains a lot of paradoxes. When it's simple, we make it difficult. When it's difficult, we over simplify it. You look smart when you are not the smartest person in the room. To lead people you must serve them. The list goes on and on. The circumstances of leading during the crisis of COVID-19 threw leaders into a relentless spin cycle of all of these paradoxes and that can create a lot confusion for leaders which usually leads to paralysis by analysis. However, leading during crises can produce important lessons that should not be forgotten.  I have found one leadership truth that ought not be forgotten when cutting through the turmoil of leading during crisis... PROXIMITY correlates to leadership effectiveness during crisis . Leaders should always aspire to and plan for way to be close to their people, but the more negative and disrupting the circumstances the closer the leader should draw to their people. A leader doesn't even have to have all the an